The Results are In!

The block party and one-mile race was held on Sunday, March 29, and drew over two thousand Atlanta-area and local Virginia Highland residents to support the neighborhood landmark. The event featured music, food and family fun with local fire-fighters, plus the annual noodle-eating contest.

Located in the Virginia Highland neighborhood, Fire Station 19 has been a city landmark for more than 90 years and is Atlanta’s oldest operating fire house. Although only basic repairs are needed and the station is in good structural condition, due to its age and lack of city funding, station 19 has automatically been put on the chopping block for 2016 unless the community can raise the necessary funds to renovate.

Saving our station is within reach.

The public recently voted and approved the Renew Atlanta Infrastructure Bond, and district 6 councilman Alex Wan has set aside funds to help with station 19’s preservation. To date, with the donation from Morningside Mile 2015, the community has raised more than $100,000 to supplement the renovation funds, with another $100,000 needed to meet the goal necessary to keep No. 19 operating in a safe and efficient manner for another 50 years.

You Can Help Save Our Station

Those who wish to get involved in the fight to save Fire Station 19 can donate online or attend upcoming fundraising events. To learn more about fire station 19, visit the website.

To stay in touch with the conversation, participants are encouraged to use the social media hashtag, #SOS19.

Since its inception in 2003, HomeGrown Charities, the charitable arm of Home Grown Restaurant Concepts (Doc Chey’s, Dragon Bowl, Osteria 832), has raised more than $237,000 to benefit local non-profits and more than $94,000 for station 19 alone through annual events such as Breakfast with Santa, Anniversary Parties and Morningside Mile. In 2014, the Atlanta Fire Department awarded Chey with the Citizen Award of Honor, for more than 17 years of exemplary service and support to Atlanta Fire Rescue. Additionally, the group was a state winner of the National Restaurant Association’s Restaurant Neighbor Award and the Georgia Restaurant Association’s Distinguished Service Award at the 2011 GRACE Awards. 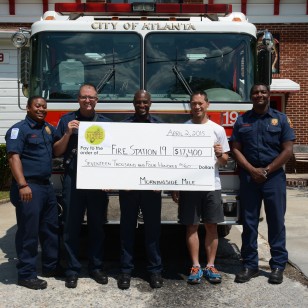