Ring in the Year of the Sheep at our 10th annual Chinese New Year celebration!

Beer Specials
We’re donating 100% of our profits from each Tsingtao & SweetWater Second Helping beer ordered to The Giving Kitchen, an awesome local org that helps folks in the restaurant industry experiencing catastrophic emergencies.  SweetWater is also donating their profits!

nosubhealth.com
Lucky Food:
Order the Lucky Sampler with a trio of items believed to bring good luck in the new year.  Includes peanut noodles (health & longevity), pork dumplings (wealth), and shrimp rolls (happiness).  Perfect as an appetizer to share.  For extra good karma, we’re donating a portion of proceeds to The Giving Kitchen.

*Brrr…it’s too cold for lions.  Due to weather, we have rescheduled our lion dances & giveaways to Sat, Feb. 28th.

What is Chinese New Year?

Chinese New Year is a 15 day traditional celebration of the Chinese lunar calendar, and is the most important of holidays in China.  It is celebrated with family feasts, lantern festivals, gift giving, fireworks, lion dance performances and plenty of tradition.  Susperstition plays a special role in this holiday.  People often wear red to ward off evil spirits.  Good luck foods are consumed like dumplings, which look like little purses, and are believed to bring good wealth.  Each year is marked with one of the 12 Chinese zodiac animals, and 2015 is the Year of the Sheep.

Are You a Sheep?

People born in the year of the sheep are tender, polite, clever and kind-hearted.  They have special sensitivity to art and beauty and a special fondness for quiet living.  They are wise, gentle and compassionate and can cope with business cautiously and circumspectly.  In their daily life, they try to be economical.

Performed for thousands of years, the lion dance is supposed to bring good luck and prosperity.  Two kung fu experts make up the lion – one to control the head, and another to animate the rear. Hanging from the ceiling is cabbage, which symbolizes fortune, and a red envelope. The lion dances to the drum beat, rears up on its hind legs to eat the red envelope and cabbage, then spits it out. mens health. If the lion spits the cabbage at you, you’re the chosen lucky one! 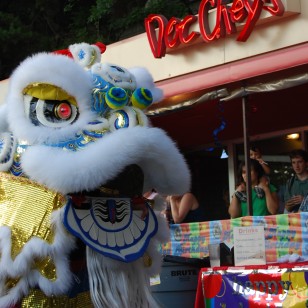